On March 13, 2012, the Louisiana Sec. of State's office posted a note from its attorney on its Facebook page: 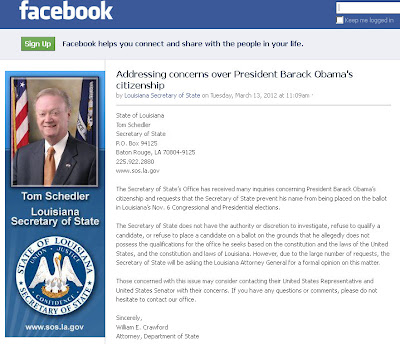 The note seems to have been removed since then.

In summary, the note said that the Louisiana Sec. of State does not have the authority or discretion to investigate, refuse to qualify a candidate, or refuse to place a candidate on a ballot on the grounds that that he allegedly does not possess the qualifications for the office he seeks.

I believe that is a correct reading of the law.

However, the Louisiana Sec. of State's office appeared to take the opposite position four years ago. Jay Dardenne was Sec. of State at that time, but much of the SOS staff was the same then as now. Dardenne's assistant, Tom Schedler, succeeded him. There have been no changes in the relevant laws in the last four years.

That year, the nominee of the Socialist Workers Party was Roger Calero. Mr. Calero is an immigrant from Nicaragua and is certainly not a natural born citizen of the United States. (Socialist parties in the United States have frequently nominated constitutionally ineligible candidates for President or Vice-President in protest of the discriminatory nature of the clauses that bar candidates based on age or national origin. Some states allow those constitutionally ineligible candidates to appear on the states' ballots; some do not. That is a matter of state law. Surrogate candidates are used in the states that refuse to place the official nominees' names on the ballot.)

According to an August 2008 Baton Rouge Advocate article about Calero's candidacy, La. Sec. of State's spokesman Jacques Berry said that in order for a Presidential candidate to appear on the ballot in Louisiana that candidate must be U.S. born. Calero did not appear on the Louisiana ballot that year. Instead, the SWP used a surrogate candidate in Louisiana. I blogged about that at the time because I thought Mr. Berry was wrong.

I emailed Berry at the time explaining why I thought he was mistaken about the law and asking him to provide a citation for his claim. I never got a response.

This year the Party for Socialism and Liberation nominated Peta Lindsay for President and Yari Osorio for Vice-President. Both candidates are constitutionally ineligible for those offices -- Ms. Lindsay because she is too young and Mr. Osorio because he is not a natural born U.S. citizen. Presumably, they will be allowed on the Louisiana ballot, given the SOS's improved understanding of the relevant law.
Posted by Randall at 1:29 PM