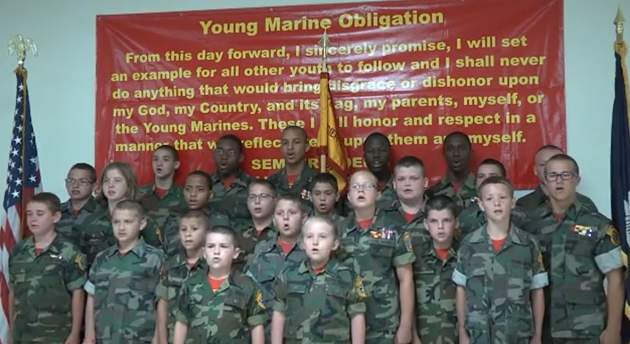 The Bossier Parish Sheriff’s Office (BPSO) sponsors and administers a Young Marines program which is intended to promote the “mental, moral and physical development of its young recruits.” These recruits are boys and girls between the ages of 8 and 18.

Here’s a description of the Young Marines from the program’s page on the BPSO website:

Upon joining the Young Marines, each recruit will undergo basic recruit training for a minimum of 26 hours. During this time, the youth will have the opportunity to learn military history, customs and courtesies, close order drill, physical fitness, rank structure and other subjects pertaining to life skills. Most importantly, the youth will learn to bond and relate with other young recruits and the opportunity to interact with caring adult mentors that are committed to providing them with a safe place to develop and grow with special emphasis on the love of God and fidelity to our country. 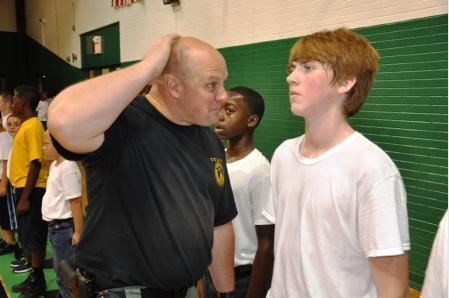 From this day forward, I sincerely  promise, I will set an example for all other youth to follow and I shall never do anything that  would bring disgrace or dishonor upon God, my Country and its flag, my parents, myself or the  Young Marines. These I will honor and respect in a manner that will reflect credit upon them and myself. Semper Fidelis.

1. Obey my parents and all others in charge of me whether young or old.
2. Keep myself neat at all times without other people telling me to.
3. Keep myself clean in mind by attending the church of my faith.
4. Keep my mind alert to learn in school, at home, or at play.
5. Remember having self-discipline will enable me to control my body and mind in case of an emergency.

The BPSO Young Marines Program (which is “instructed by a Bossier Parish Deputy, who is a former U.S. Marine, and several active U.S. Marine volunteers”) also includes a “voluntary” prayer component.

A few months ago Bossier Sheriff Julian Whittington had his request for federal funding for the program denied after he refused to remove the prayer component from the program.

On May 23 Whittington sent a letter to Louisiana Governor Bobby Jindal complaining about the loss of funding. Whittington’s letter begins:

As a Christian, Sheriff and American citizen, I am writing you to express my frustration and concern over the persistent aggression and infringement of our religious freedoms which have been imposed upon the law enforcement grant programs, specifically related to the Louisiana Commission on Law Enforcement (LCLE).

Funding for some important programs has hit a road block due to the mere mention of God and the use of voluntary prayer. This appalling situation arose when someone in the Department of Justice, Office of Civil Rights, in  objected. 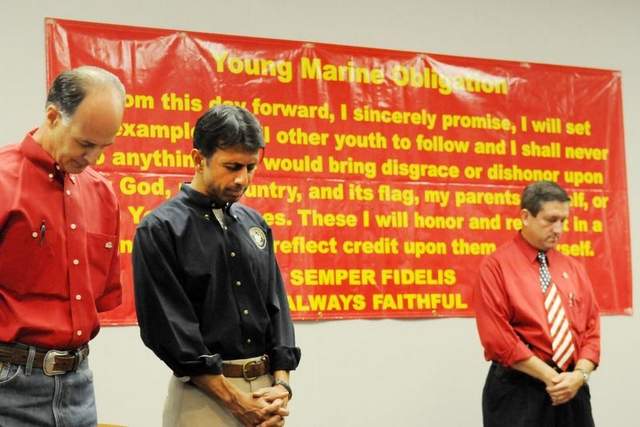 On the Fourth of July, Whittington, Jindal, country music singer Lee Greenwood, and others gathered for an “In God We Trust” rally to protest the loss of those federal funds.

Whittington seems to think that simply foregoing those federal funds will mean he is no longer bound by the Establishment Clause. Of course, that’s not the case. If any proper party filed a lawsuit over the BPSO Young Marine Program’s religious content, the lawsuit would almost surely be successful. The legal issues would be very similar to those involved in cases dealing with the promotion of religion by public schools.

At his rally Sheriff Whittington declared:

We are a Christian nation based on Christian ideals and the very idea of the mention of God or voluntary prayer is somehow prohibited and offensive is just as upsetting to them as it is to me.

Here’s what Bobby Jindal had to say about all this:

The federal government is treating prayer as if it is something you can catch, as if it’s contagious. There are many things I worry about when it comes to my three children, but never have I worried they were getting too much prayer. … The First Amendment guarantees us freedom of religion, not freedom from religion. It was written to protect people of faith from government officials, and we are going to hold on to that freedom.

I have to wonder whether Jindal might worry about how much prayer his three children were getting if they were praying to a deity that the Jindals don’t believe in. In any case, I don’t worry about how much prayer Bobby Jindal’s children get, either.  That’s none of my business. That’s a matter that should be left to the Jindal family. However, when Jindal or Whittington or any other government official decides that it’s okay for them to use their government jobs to push their religion on other people’s children, then I start worrying.

As someone who was raised Hindu, Bobby Jindal must be aware that oaths describing obligations to “God” and instructions to attend “church” are not even inclusive of all “people of faith.”

I’m not sure if Jindal is sincerely acting with the zeal of the convert or if he is just a shamelessly needy and power-craving politician who is pandering to the crowd. Both of those things may be true.

Randall,
Thank you for speaking out. Just looking at the Photo of the "marine" trainer drives home memories of all that is bad about these paramilitary groups. Indoctrinating young kids into this kind of mind set serves no good purpose.

Yet another Republican governor saying "The First Amendment guarantees us freedom of religion, not freedom from religion." Rick Perry said almost the exact same thing not too long ago. What if I don't want any religion? What if I don't want someone else's religion forced on me? Freedom FROM religion is very important to me.
And, that Hitler-Youth paramilitary group? Yikes. Chilling.

Did you notice the side arm the instructor is carrying on his hip?

Everything about that photo puts into question just how "voluntary" any component of this program can really be for the children involved.